This is a charming story from Siobhan, a Scientology parent from England, showing that Scientology Assist technology can be learned and used well by anyone:

I have been a Scientologist all my life so also grew up around Scientology assists etc., as ways to handle upsets and injuries.

I have always given my kids assists, even when babies, to handle illness or upsets. Several months ago my daughter Kiera, who is 6, burnt her hand quite badly on the stove at home. It turned out to be a second-degree burn. We didn’t know this at first but she was in a lot of pain. I ran 3 different assists with her over the course of the first day. I did “Think of Something Worse”, “Where Did it Happen” and “Look At My Fingers”, to great success.

Last week I had an accident whereby I tripped over a toy in the lounge and fell into the shelving. I was holding my youngest daughter at the time, 16 months and it was quite upsetting for us both. I hurt my arm and knees and when I landed on the floor something quite large fell off the shelf onto my chest (which I didn’t even feel because I had actually gone into shock!). My youngest was fine but I was in a lot of pain.

A couple hours later, my 6 year old came up to me and asked if she could give me an assist. I was so touched by her origination I agreed. She could remember the Touch Assist, as well as some other assists. I said she should give me the “Look at My Fingers” assist (touch assist) on my knee, which was the most painful injury I had sustained. We quickly went over the assist in the LRH assist pack. She was very shy about doing it but gave the commands. I really acknowledged her after and said I felt much better.

Her face was a picture of ecstasy afterward! She was just so thrilled to be able to help me. She asked me if L. Ron Hubbard had written the assist book. I confirmed this and she proceeded to declare that he was a wonderful person. She was already enamoured with LRH but this increased her respect and love for him tenfold as she could really see how what he has done not only helps her (through assists and her course, Learning How to Learn) but also those who matter most to her. 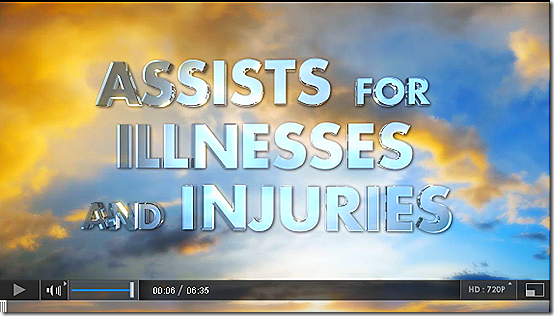 For more information on getting kids up on their feet after an injury, watch the above video and take the free Scientology on-line course available here on Assists for Illnesses & Injuries.