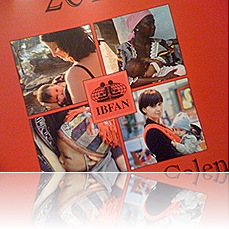 I always though my wife was gorgeous enough to be on a calendar, but now she’s actually on one!  🙂

Kathryn and Mackenzie now proudly grace the cover of the 2011 IBFAN Breastfeeding Calendar, her photo selected by the organization from thousands around the world, on a multinational calendar which is distributed to promote breastfeeding and raise awareness around the world for its importance in proper baby nutrition.

In addition to being on the cover, she’s Miss October, if you must know.

As the pic below is a little low-res, you can see the full-res original photo here – a shot I took of her when we took a fantastic hike up to a cliff overlook in Harpers Ferry last fall.

Kat and I are big fans of breastfeeding.  Mackenzie was breastfed exclusively until about 7 months old, at which point we started introducing solids, and supplementing her diet with Barley Formula to keep up with her voracious appetite.

“The largest cause of upset in a baby’s early life is just rations. The baby might be fed, yes. But with what?” — LRH

Obviously the ideal is to breastfeed the baby as long as feasible, as that’s going to give the baby the best possible nutrition, plenty of protein, and all of the other things needed to make a sharp, smart, strong baby who has strong defenses against illness and is – well – happy.

In the same article quoted above, Mr. Hubbard also suggests the use of a Barley Formula to be used as a natural alternative to breastmilk if the need arises – i.e. if there is something preventing the woman from breastfeeding or if the baby isn’t getting enough nutrition from the breastmilk due to an overworked or undernourished mother.

For us, breastfeeding was a perfect solution.  Mackenzie was not sick at all (not even a little) during her first 7 months, and was healthy, strong and sharp.   However, right around her 7th month, her appetite just flipped suddenly into overdrive, and the baby turned into a bottomless pit — and mommy was simply not able to keep up.  So, we started supplementing diet with home-made baby food and prepared barley formula as suggested in the above article, which we have had excellent luck with.  There have been times since then where she’s gone on almost exclusively on the barley formula, and she loves it.

And her growing has just not stopped.  She’s the only 1-year old at a daycare full of 2-year-olds, and she’s almost as big and has almost the same vocabulary as any of the 2-year-olds there.

So, we’re planning on not changing much of anything with baby #2 – breastfeeding as long as possible, then supplementing with barley formula and solids when appropriate.

As a note, the full article quoted above, along with illustrated instructions for Barley Formula is available as part of the Children on-line study course, available for free from the Scientology Volunteer Ministers.

16 thoughts on “My Wife is a Breastfeeding Calendar Cover-Girl!”